In Denmark it's illegal to start a car while someone is under the vehicle, and before starting car you must check lights, brakes, steering and honk your horn.

You can't leave your broken car on the side of the road without marking it with a red, reflecting triangle.

Car drivers in Denmark must be very careful if a horse drawn carriage will try to pass your car. If the horse becomes nervous, the car owner is required to stop the car, and if necessary even cover car with something.

Headlights of your car in Denmark must be ON all the time in order to distinguish it from parked cars.

Very old law that say - When you drive car, you must send someone in front of your car with a red flag to warn horse drawn carriages that a motorcar is coming this direction. (Of course this is not true nowdays!)

In Denmark it's illegal not to report police when a person has died, and you'll be fined with 20 Danish krone (If they will find you :-).

Very useful law for saving the environment. You must pay a special fee each time you purchase plastic or glass bottle. This money will be returned upon return of the bottle to any of supermarkets.

Another great Danish law for any tourists. At the inn no one can be charged for food unless, this person by his/her own opinion, is "full". Also restaurants can not charge for water unless it's served together with ice or a lemon slice.

Did you know that carport added to a building will increases the value of the building.

It's a crime to show disrespect to Danish flag. 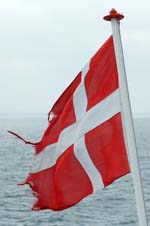 You should know that if the Danish flag is hoisted to half of the potential height of the flag pole reflect grief and mourning.

The Danish flag should never be fastened, displayed, used, or stored in such a manner as to permit the Flag to be easily torn, or damaged in any way.

Do You Know More Fun Facts About Denmark?

Do you have something interesting or funny? Share it!

What Other Visitors Have Said

Click below to see contributions from other visitors to this page...

Denmark - A cycling nation
Denmark doesn't have easy access to transportation, SO THEY RIDE BIKES EVERYWHERE.

Corruption in Denmark
Did you know that Danmark is the country in the world with least corruption.

Danish flag news - Interesting Facts.
The danish flag in denmark should always be higher up if displayd with other countries. We have 2 different colored flags the red and red bloody colored …

Illegal in Denmark
It is illegal to show other people that are not in your family any body parts except for head, thighs, arms, and legs.

Hair/hat needle on busses
By an old law in Denmark, it is forbidden for women to wear a hair/hat needle more than 10 cm. long, when traveling with public busses or trains.

Emma and Marc getting married
Marc and emma paynter made love and made a couple of young fishes and got married in denmark.

Fart Limit
In Denmark it is illegal to fart more than 5 times in a minute, also the fart must last no longer than 4 seconds or you can be prosicuted.

Carlsberg
Carlsberg Breweries ,which orgininates and is based in Copenhagen, makes up 55% of the beer imported into the UK. --- For more information please …

EVERYTHING.
peacocks originated from Denmark then died out. Denmark is also so small that there is no information about it at all. :-) There are only two cool people …

it can't touch the ground either !
the danish flag is not allowed to touch the earth as making the flag dirty is dishonoring it!

Faroe Islands Whale
When you are born on the Faroe Islands, you automatically are registered in a book of names, for the particular village. If you leave the country and come …

Did you know?
On the June 15 1219 Denmark was the first country in the world to have a flag.

denmarks islands
denmark has 500 islands, but only 100 of them are inhabited! denmark produces so much food they produce two times the amount of food they need! If …

Angela from Kentucky
I was an exchange student in Roskilde, DK and was told that it is illegal to turn away anyone who comes to your home asking for water or a toilet.

Hit Swedes with a stick
Very old law says, that if the Swedish cross the frosen sea you can hit them with a stick

Drinking Facts
In Denmark you can drink at any age but you have to be at least 16 years of age to accualy pruches acahol.

The United Kindom Facts
The UK is a country in north-western Europe. It is bordered to the south by the English Channel; to the east by the North Sea; to the west by the Irish …

true facts about danish people
danish people are the most happyist people (i guess that means i'm danish) :) there are (as of 2010) approximately 5,519,441

Beats the swedish with sticks!
an old law, which is still in effect, says that every dane, is entitled to beat any swedish man with a stick, if the Swedish man, comes walking across …

The crazy fact about Denmark
In Denmark it is illegal not to eat a Danish bagel on the first Thursday of every month.

Interesting facts about LEGOs
They are made in denmark It is estimated there are 53 Lego bricks for every person on the planet.

Back to Homepage from Fun Facts about Denmark